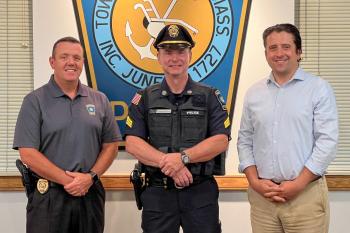 The Hanover Police Department is proud to announce the promotion of Sergeant Dave Zemotel to the rank of Lieutenant. Lt. Zemotel was raised and educated in Hanover where he has proudly served the community since 1989 taking his first job in public safety as a dispatcher. He joined the police force in 1991 as a Special Police Officer before being appointed as a full-time officer in 1997. In 2015, he was promoted to the rank of Sergeant and assumed the role of shift commander of the 4-12 shift.

In addition to his duties as a patrolman and shift supervisor, Lieutenant Zemotel has served as the department Firearms Instructor and Firearms Licensing Officer while also being certified as an instructor for the Municipal Police Training Committee. In recent months, Lt. Zemotel has overseen the Hanover Police Department’s effort in creating an Officer Wellness Program, which will benefit our officers and the community for years to come.

Lt. Zemotel holds a bachelor’s degree from Bridgewater State College and a master’s degree in Criminal Justice Administration from Western New England. Lt. Zemotel will start in his new position on August 26, 2022, and will be heavily involved in administrative and operational duties as an executive command staff member. He will assume an integral role as the department continues to move forward with meeting the demands of 21st-century policing. A ceremonial pinning will take place in a few weeks.